Clamping Down on Rogue Mobile Retailers

We have all heard about the case of the Vietnamese tourist who kneeled and begged for a refund of an iPhone 6 from an errant retailer in Sim Lim Square. This case sparked a public outcry and shone the spotlight on the wider, prevalent issue of such errant retailers at Sim Lim Square and People’s Park Complex, which contravene the Consumer Protection (Fair Trading) Act (CPFTA) for engaging in unfair practices against consumers.

1. Proving “unfair practice” under the CPFTA

In the case of the Vietnamese tourist, Mr Pham, the errant retailer Mobile Air had represented the price of the iPhone 6 to be S$950 to him. It was only after Mr Pham had paid the S$950 to Mobile Air, that the shop employees informed Mr Pham that he had to pay an additional S$1,500 as warranty fees.

Applying section 4(a) of the CPFTA, this may be an example of “unfair practice” by Mobile Air because Mobile Air, in not informing Mr Pham up front about the additional warranty fees, resulted in Mr Pham being “reasonably misled” as to the actual price of the iPhone 6.

Applying section 7 of the CPFTA, Mr Pham is entitled to sue Mobile Air for unfair practice in the Small Claims Tribunals.

Applying section 35(1)(a) of the Small Claims Tribunals Act, Mr Pham can get a refund of his money against Mobile Air.

However, it should be noted that a consumer may not necessarily be able to get a full refund. Applying section 7(9) of the CPFTA, factors that may affect the amount of refund a consumer is able to get include whether the consumer made a reasonable effort to:

The current measures available under the CPFTA

However, both actions have limited effectiveness in restraining errant retailers from engaging in unfair practices: the former only works if the errant retailer consents in entering into the VCA, and the latter process can take several months.

For example, in the case of Mr Pham, when CASE invited Mobile Air to enter into a VCA, Mobile Air refused. Hence, CASE started injunction proceedings against Mobile Air, but such proceedings will take a long time to come to fruition.

Going beyond the CPFTA: Do Landlords have a Part to Play in Clamping Down on Errant Retailers?

(Note: the term “landlords” as used in this article refers to both the management team of a strata-titled mall and individual landlords who lease their units out to other retailers.)

CASE has recently suggested that landlords can play their part in clamping down on errant retailers too, by passing and enforcing by-laws that stipulate that tenant retailers have to run their businesses in accordance with the CPFTA.

It must be noted that the question of whether landlords have such a part to play is currently open. For example, even if landlords have the power to pass such by-laws, they may not be inclined to enforce them due to their personal interests in receiving rent from the errant retailer. The Sim Lim Square management, which manages the property where Mobile Air is situated, has stated that it has no powers to pass by-laws.

Future Legal Developments to Look Out For

The fact that CASE is reaching out to the landlords to play a part in clamping down on errant retailers may signify that the current measures provided for doing so under the CPFTA, are inadequate. Hence Parliament needs to re-examine the issue of long-term consumer protection: whether landlords have a role to play in clamping down on errant retailers and if not, whether the CPFTA should be amended to allow CASE to take stronger action against errant retailers. We may see some interesting developments in this area of the law yet.

This article is contributed by Goh Ee Hua, a student at SMU School of Law. 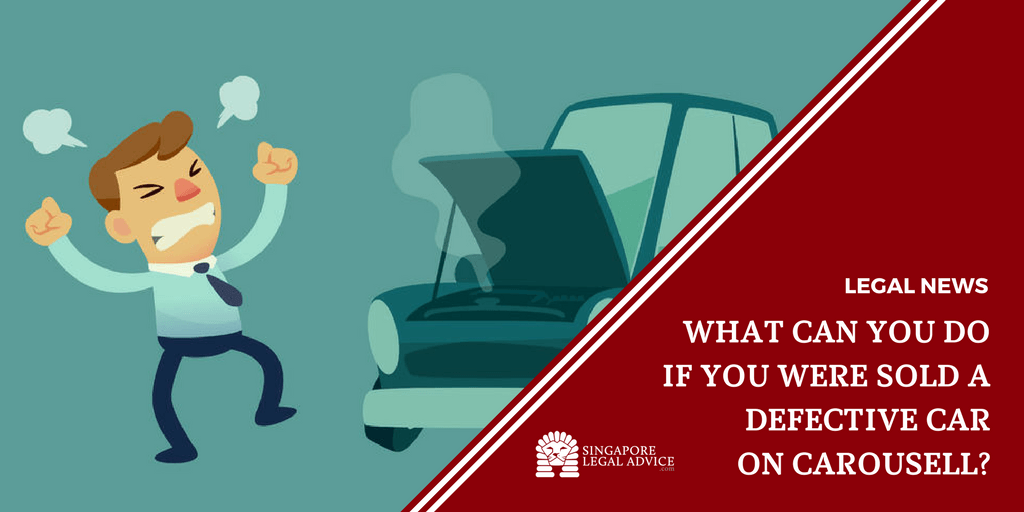 What Can You Do if You Were Sold a Defective Car on Carousell?