With customers’ increasing reliance on online review platforms such as TripAdvisor, Yelp and HungryGoWhere, it should come as no surprise that, given the available avenue of appealing to legal authorities to settle minor disputes, business owners have become increasingly litigious in protecting their businesses’ reputations from their customers’ negative public feedback.

This article will explain the possible steps you can take should you have left a negative online customer review for a business and are threatened to be sued, or are being sued, by that business.

What Happens If a Business Makes a Defamation Claim Against Me?

To succeed in a defamation claim against a customer in the Singapore courts, a business owner need only prove that the customer published an untrue fact that would tend to lower its reputation in the opinion of an average person who lives in Singapore.

Consequences of a successful claim

If they are successful, the consequences for the customer typically include some combination of having to pay damages to the business and/or issuing a public apology/retraction to withdraw any imputations published/said against the business.

What Do I Do If I Received a Legal Letter from a Business that I have Reviewed Negatively?

Show the letter, and a copy of your review, to a lawyer before you respond to the letter or do anything. Depending on what you actually put in your review, you may or may not be in trouble (see below).

Most negative reviews are, by definition, defamatory on the face of them. For example, “The bread in this restaurant was a bit stale” is a statement that would tend to lower the reputation of a restaurant in the opinion of an average person.

As strange as it may seem, if a restaurant threatens to sue you for publishing that statement online, the burden is on you to prove that you had a legitimate lawful reason for doing so – otherwise you may owe them damages.

To help you show that you did have such a reason, you will usually need the services of a lawyer.

How Can I Defend Myself Against a Defamation Claim?

There are a few common defences that can be deployed in these circumstances. The first is the defence of fair comment. The gist of this defence is the simple response that the statement published was not presented as a fact at all but rather an opinion, to which we are all entitled.

To use the example above as an illustration, the statement, “The bread in this restaurant was a bit stale” is factual in nature. It would be easier to defend yourself using the defence of fair comment if the statement had been framed as an opinion, like “I thought the bread tasted a bit stale.” This is clearly intended to be read as your personal opinion based on how the bread tasted to you.

However, you cannot simply put “I thought” before a fact and expect to get away with a defamatory statement if it is clearly an untrue fact rather than an opinion.

For example, “I thought the chicken contained harmful bacteria” won’t work as this is clearly mere speculation of a fact. You cannot possibly know for a fact whether food contains bacteria without conducting scientific tests on samples of the food.

If the defence of fair comment won’t work, the defence of justification might. The gist of this defence is simply the response that the defamatory statement that was published is actually true, but the burden is on you to prove that. Having photographs that support your allegation tend to be most helpful in these scenarios.

For example, if you are saying that the chicken contained harmful bacteria, you could prove your allegation with a photograph of a worm crawling out of the chicken, or, far less likely, lab results showing the presence of bacteria in the piece of chicken that you took from the restaurant.

If all else fails, the defence of qualified privilege might help. The gist of this defence is that you are providing information which you believe, in good faith, to be true to people who have a legitimate interest in receiving it.

Let’s say your statement is “This restaurant has poor hygiene standards and I contracted food poisoning as a result.” Even if it turns out your food poisoning did not originate from this restaurant, you may still be able to escape liability if you can show that you had a reasonable basis for making this allegation.

For example, you saw a cook drop food on the kitchen floor and put it back in the frying pan and the next day you had diarrhoea. The general public has a legitimate interest in receiving this information in order to protect public health.

You must also show that you made the statement in good faith, without malice, i.e. not to intentionally damage or harass the business, but in the interests of protecting the public’s health.

Whether any particular statement falls within the scope of one of these defences is not always straightforward, so it is always advisable to have a lawyer respond to a legal letter threatening a defamation suit rather than attempting to do so yourself.

How Can I Protect Myself From Allegations of Defamation When Leaving Reviews?

In recent news, some individuals received letters of demand from a skincare clinic threatening legal action for leaving it 1-star reviews online. This was after they responded to the clinic’s website advertisement of a “free trial”, only to be told at the clinic that they first had to sign up for a package. ?? – If you are intending to leave a bad review for a business, be aware that you may be risking a defamation lawsuit against you! ? To protect yourself from liability, it may help to phrase any opinions in your review as opinions, instead of facts. Also, ensure that the facts in your review are 100% accurate! ✔ Try to back up your facts with evidence too, but don’t break any laws while gathering such evidence! ? – If the business threatens to sue you over the bad review though, it can help to consult a lawyer on what to do next! That’s where we can help – #SingaporeLegalAdvice offers a Call a Lawyer service ?, where you will be able to book a 20-minute phone consultation with a lawyer of your choice for just $49. ? Link in bio!

A post shared by SingaporeLegalAdvice.com (@singaporelegaladvice) on Dec 21, 2018 at 12:14am PST

Need a defamation lawyer to assist with your legal matters? 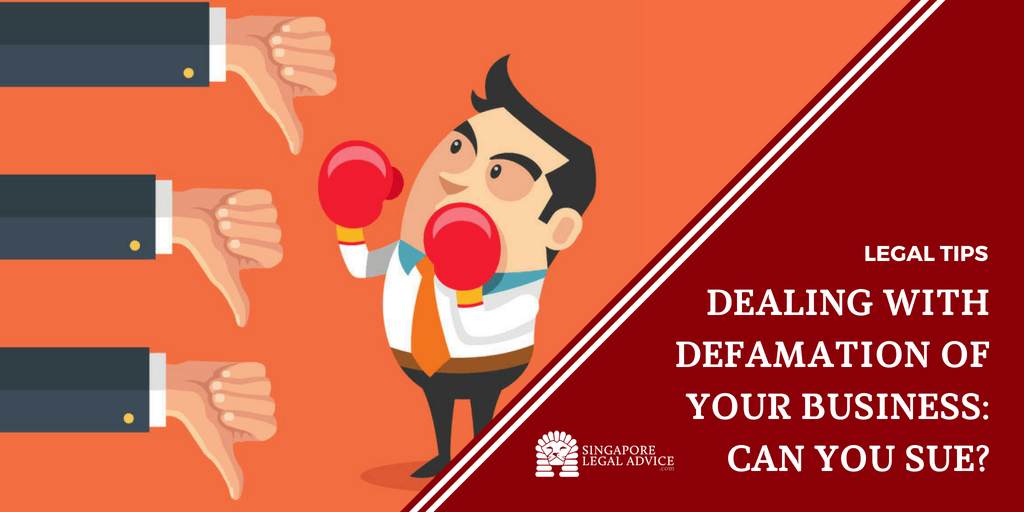 Dealing with Defamation of Your Business: Can You Sue?

Mohamed Baiross
Mr Baiross is an extremely competent lawyer. His advice is clear and straight to the point, which allowed me to…
Read more