How to Legally Borrow Money from Licensed Moneylenders in Singapore

There may be instances, including emergency situations, where you find yourself in a bind without being financially liquid or without enough savings. In these circumstances of financial need, there are several options you may take in order to obtain the money you may need to shell out.

According to the Moneylenders Act, a moneylender is one who, whether they act as the principal lender or as an agent to a moneylending institution, carries or holds himself out as carrying the business of moneylending.

Under the law, no person is allowed to be a moneylender unless they are authorised to do so by licence, or they are excluded or exempt moneylenders under the Moneylenders Act.

Excluded moneylenders, include, amongst others, those who are permitted to, or not prohibited from, lending money under any other written law (other than the Moneylenders Act). For example, a pawnbroker licensed under the Pawnbrokers Act.

Exempt moneylenders are those who have specifically been granted exemption from holding a moneylender’s licence based on the discretion of the government and subject to approval of application for exemption, as provided under the law.

How Can I Know If a Moneylender is Licensed?

To allow individuals to verify that a moneylender is indeed licensed, the Ministry of Law has compiled a list of licensed moneylenders in Singapore which you can find here.

Moneylenders are also prohibited from soliciting loans via text messages or phone calls, so if you are approached to obtain loans in these manners, it is likely that the moneylender may be unlicensed.

Furthermore, even while a moneylender may be licensed, the following unfair practices are not acceptable:

In instances where this happens, you should report the moneylender to the Registry of Moneylenders at the Ministry of Law (see below).

Determine your ability to abide by the contractual terms

This includes the repayment of the loan itself and any other interest charged (e.g. nominal interest and late interest – see below) on the loan.

Hence, you should first gauge whether you are able to abide by the contractual terms of the loan by taking into consideration factors such as your own income and other financial obligations.

Where possible, it is advisable that you only borrow what you can repay given your personal circumstances.

What happens if I do not abide by the contract terms?

What are the interest rates money lenders can charge?

The maximum interest rate moneylenders can charge is 4% per month for the value of the borrowed money (i.e. nominal interest) as well as for each month the loan is paid late (i.e. late interest).

Interest charged on the loan is to be computed on the monthly outstanding balance of the principal remaining after deducting the payments made. For example, if your loan amount is $20,000, and you have repaid $10,000, then the 4% interest rate will be computed for the remaining $10,000.

On the other hand, late interest is to be computed based on the amount overdue. For example, if you are paying on instalment basis of $5,000 per month, which you were unable to pay in time, then the 4% additional late interest charge will only apply to the $5,000.

Licensed moneylenders may also impose other fees as provided by law, including loan approval fees, additional late payment fees and legal costs incurred by the moneylender to recover the loan.

The total charges imposed by a moneylender on any personal loan, consisting of interest, late interest, upfront administrative and late fees also cannot exceed an amount equivalent to the principal of the loan.

For example, if you take a loan of $10,000, then the interest, late interest, administrative fee and monthly late fees cannot exceed $10,000.

Also, beware of caveats that may be lodged against your property as part of the terms of your loan. In cases of default in the payment of your loan, agreeing to put a caveat on your property may grant the moneylender the right to obtain repayment of the loan from proceeds of the sale of your property.

What this means is that you may not even get anything from the sale of said property, especially if the value of the property is equivalent to or less than the value of your debt, because the proceeds will automatically be used to pay back the moneylender.

What are the Requirements to Borrow Money from Licensed Moneylenders?

A duly completed application form must be submitted to the moneylender, which includes the borrower’s particulars such as the:

If there is a surety to the loan, then the particulars of the surety must also be included. A surety is any person/s who guarantees to pay back the loan, including the corresponding interests and charges, in case the borrower is unable to do so.

Supporting documents must also be submitted to the licensed moneylender in order to proceed with the loan application. These may include:

Foreigners residing in Singapore may also borrow from licensed moneylenders in Singapore and may be required to submit additional supporting documents other than the ones stated above. These documents include:

How Much Can I Borrow?

For secured loans, there is no cap to the loan amount. A secured loan is a loan for which an asset is used as a collateral. Should the borrower be unable to pay the loan, the moneylender may seize this asset.

For unsecured loans however, there is a total maximum amount that may be borrowed from licensed moneylenders, as shown in the table below:

What Must Moneylenders Inform Me About Before They Grant Me a Loan?

Before granting any loan, the moneylender is required by law to inform the borrower in writing, the terms of the loan, including information on the:

All moneylenders are also required to give borrowers a cautionary statement which warns the borrower of the abusive conduct carried out by some moneylenders. Borrowers are also subsequently informed about where to lodge a formal complaint if necessary.

What Happens after the Loan Has Been Approved?

Once you receive the proceeds of the loan, the obligation to pay back the loan now arises, based on the terms agreed upon.

As the borrower, make sure you are also aware of the following things from the time you receive the money obtained through the loan and even during or after payment:

What If I Can’t Pay Back the Money?

There are ways to handle any situation where you cannot immediately pay for the money you borrowed. In some instances, you can try negotiating with the moneylender for an extension or refinancing plans, but this may come with additional fees. It is advisable to do this before the loan – or the next instalment in a term loan – is due so as to avoid possible late payment charges.

If a borrower is persistently unable to pay back the loan, moneylenders have the legal right to sue the borrower, especially in cases where the loan has been secured by an asset.

However, if the borrower is unable to pay debts amounting to at least $15,000, he may resort to filing for bankruptcy, which freezes the accumulation of interest charges (and thus increased debt), as well as bars moneylenders from commencing legal proceedings until the borrower has been discharged from bankruptcy.

If total debts do not exceed $100,000, the Debt Repayment Scheme (DRS) is also a viable alternative to bankruptcy. In this scenario, the borrower is assisted by the Official Assignee from the Ministry of Law’s Insolvency Office to work out a suitable repayment schedule for all outstanding debts over a fixed period of time.

The DRS prevents moneylenders of unsecured loans from taking any legal action against the borrower, unless permission by the court is given.

What Can I Do If a Licensed Moneylender is Harassing/Threatening Me?

Harassment and threats in the pursuit of debt collection may be considered as unfair practices and subject to regulation by the Registry of Moneylenders, as stated previously. In these instances, you can contact the Registry at 1800-2255-529 to lodge a complaint. Alternatively, you can submit your complaint online through this feedback form (select “Registry of Moneylenders” and “Feedback & Complaints” as the main and sub-categories respectively).

Your complaint should include information about the moneylender such as the business name, license details and contact numbers. To facilitate the investigation, you may be asked for an interview with the handling officers so that you can provide the necessary details of the loan transaction.

You may also make a police report as the police force takes matters of harassment seriously.

While there may be instances where borrowing from a moneylender may be the most feasible solution to anyone’s financial issues, it is advised that a potential borrower first do their due diligence in terms of both their capacity to repay the loan, as well as the reputation of the potential moneylender.

Knowing that obtaining a loan creates a legal obligation, it is especially important not to make these kinds of decisions lightly.

Need a debt recovery lawyer to assist with your legal matters?

What Should a Creditor Do When a Company Becomes Insolvent? 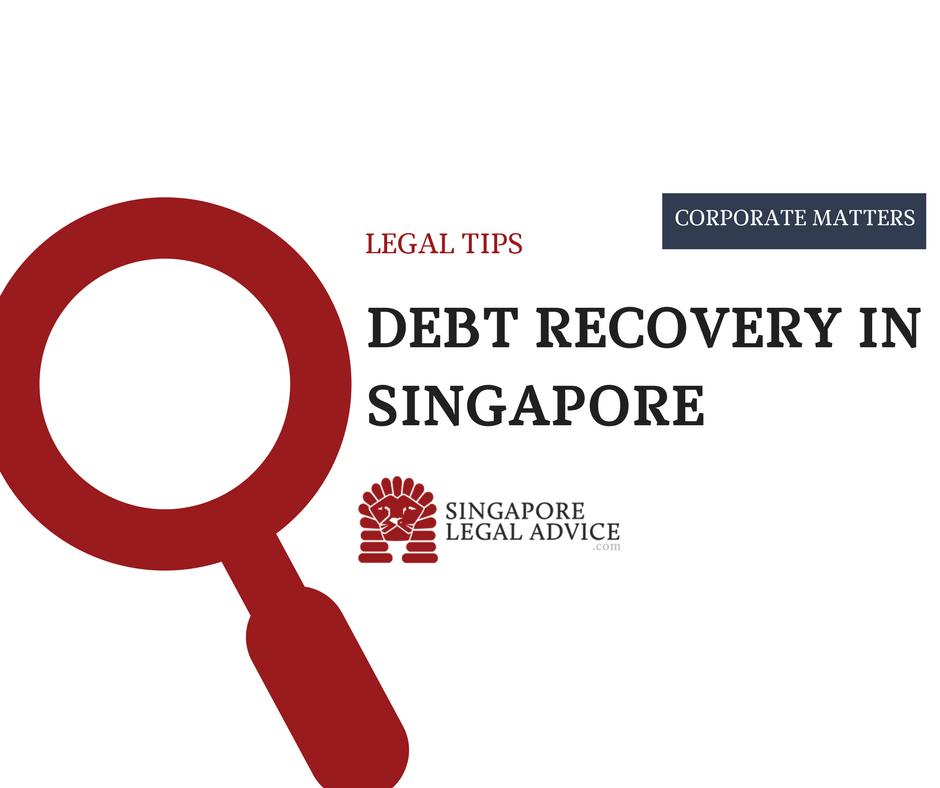 Enforcement of Court Judgments and Orders in Singapore

Debt Recovery Articles
The information provided does not constitute legal advice. You should obtain specific legal advice from a lawyer before taking any legal action. Although we try our best to ensure the accuracy of the information on this website, you rely on it at your own risk.

Radika Mariapan
Applying for POA for HDB from overseas. Very responsive and efficient service with clear instructions, samples of what to do…
Read more