Mitigation Plea: How to Plead for Leniency in Court in Singapore

Assume you have undergone criminal proceedings in a Singapore court. The court has found you guilty of the crime that you have been accused of (either because you have pleaded guilty, or the court finds that there is sufficient evidence to convict you). The court will now need to decide what type of sentence it should impose on you.

However, before the court decides on the sentence, you will have a chance to make a mitigation plea to ask for a more lenient punishment. A mitigation plea, in short, is a submission of facts or law as to persuade the court that you should be given a lighter sentence.

At which Stage of the Criminal Proceedings Will You Make a Mitigation Plea?

The following flowchart illustrates the stages of criminal proceedings including when a mitigation plea will be made: 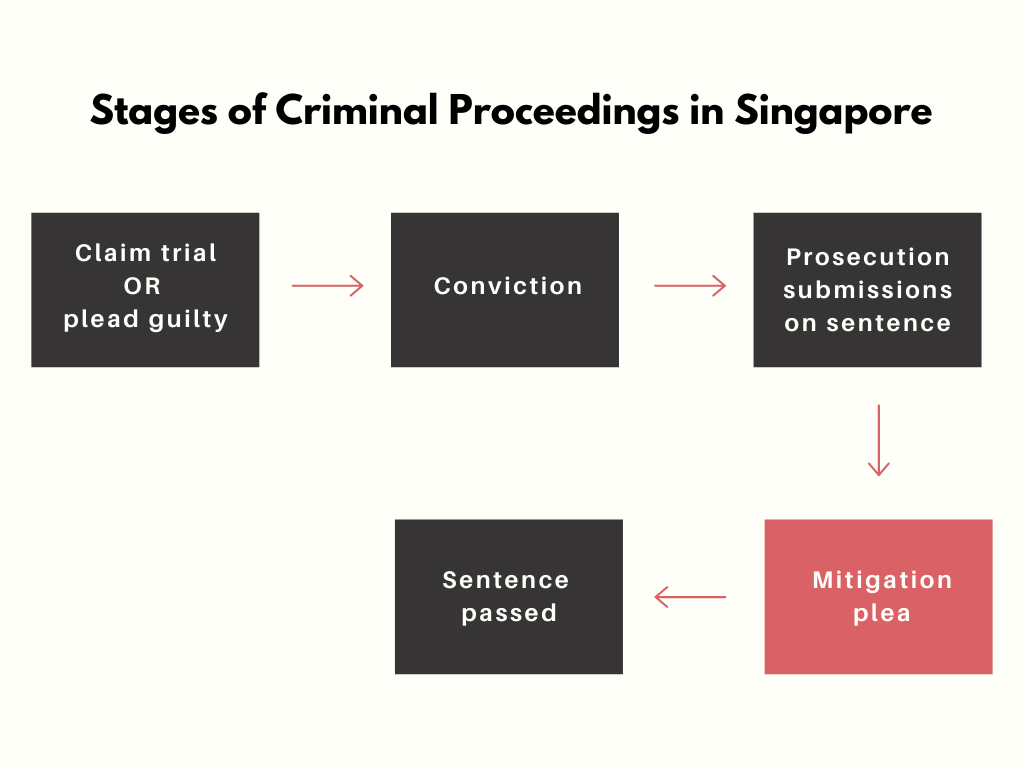 You may, for example, show that a certain sentencing precedent is inapplicable because the facts of that case are not similar to those of your case.

How to Proceed with a Mitigation Plea in Singapore

Including mitigating factors in your mitigation plea

At the end of the day, how much weight the court will place on these mitigating factors will depend on the particular facts of each case and the severity of the offence.

To illustrate, imagine that there are two 20-year old males, A and B. A commits theft of a mobile device, whereas B has engaged in the act of rioting with a dangerous weapon and caused grievous injury to a victim. Compared to A, the court in the case of B may not place much weight on his age as a mitigating factor owing to the serious consequences of the crime that he has committed.

As a result, it is more likely that B may face imprisonment while A might be able to convince the court to impose a more lenient sentence on him.

What are not accepted mitigating factors for including in your mitigation plea?

Conversely, the courts have declared that certain types of factors do not constitute mitigating factors.

For example, committing a crime because of financial hardship will generally not be considered a mitigating factor unless there are exceptional circumstances to justify the commission of the crime.

Financial hardships caused to the offender’s family when he/she is imprisoned also carries little weight as a mitigating factor, especially where the imprisonment sentence is short.

Thus, even in a case where an offender had to sell her passport to support her two children, the courts found that there was no exceptional circumstance which would justify her receiving a shorter jail term for making a false statement that she had lost her passport.

Similarly, the educational background of a person, in and of itself, is not a valid mitigating factor. The court will only consider your educational record together with other factors, such as family support or a display of remorse, to determine whether you will have a suitable prospect of rehabilitation.

The mere fact that you are a university student with a good academic record will therefore, on its own, not be a mitigating factor, for example.

Do not “qualify” your mitigating plea

At this point, it is also important to take note that in cases where you have pleaded guilty to the offence committed, you cannot “qualify” your plea in mitigation.

Normally, where you have pleaded guilty, the prosecution will prepare a Statement of Facts (SOF) and read out the SOF to the court. You will then be asked whether you agree with the set of facts that the prosecution has set out. If you agree, you will make your mitigation plea.

However, a “qualification” occurs when the contents of your mitigation plea are materially inconsistent with the SOF that the prosecution has presented in court.

For example, assume that you have been charged with voluntarily causing hurt for slapping someone, and you plead guilty to it. The SOF then states that you intentionally went to slap the other person.

However, in your mitigation plea, you go on to assert that the slap was merely accidental and that you never intended to assault anyone. In such a situation, the court will reject your guilty plea and send the matter back to trial.

Similarly, if you disagree with any of the statements in the SOF while it is being read out, you are required to raise the matter to the court before you plead guilty.

What Format Should Your Mitigation Plea be in?

There is no specified format in which your mitigation plea should be in. Thus, you can proceed to make a handwritten mitigation plea and read it out to the court. You can even choose not to prepare written submissions and simply make oral submissions on the day of the sentencing itself.

However, it is strongly recommended that you make written copies of your mitigation pleas. The availability of such written copies lets the court read your submissions beforehand and gain an understanding of your points even before you make your oral submissions.

The court may also ask you questions based on your written submissions to further understand your arguments and decide whether to impose a more lenient sentence on you.

Finally, preparing a written mitigation plea also gives the impression that you are more adequately prepared to handle your sentencing.

Please do note that if you have prepared a written copy of your mitigation plea, you will be required to pass a copy of your plea to both the prosecution and the judge.

What If You are Not Confident of Making Your Mitigation Plea in English?

If you are not fluent in the English language and wish to make your submissions on your mitigation plea in a different language, the court will ask for a translator to be present so that you can make the necessary submissions to the court in your preferred language.

Can You Retract Your Guilty Plea During Mitigation?

If you had initially pleaded guilty but later want to change your plea (i.e. from pleading guilty to pleading not guilty) during mitigation, please be aware that the courts will not allow such a course of action easily.

The courts have made it clear that an accused person will not be allowed to retract his guilty plea merely at a whim. Instead, the accused has to show that there are valid and sufficient grounds which satisfy the court that it is in the interests of justice to allow the accused to retract the plea.

In such a situation, you will need to adduce evidence to show that your earlier plea was invalid. For example, you may be allowed to retract your guilty plea where the court finds that you did not voluntarily plead guilty, or had misunderstood the nature of your plea.

If you are able to successfully retract your guilty plea, then the court will send the matter back for trial.

What Happens After You have Made Your Mitigation Plea?

After you made your mitigation, the prosecution has a right to reply. The court will then decide on the appropriate sentence to impose on you. The sentencing by the court can either take place immediately after the mitigation plea, or after an adjourned hearing if the court has to take some time to deliberate.

When the sentence is passed, you will normally be required to serve your sentence immediately. There are certain exceptional circumstances in which you can ask the court to postpone the commencement of sentence (for example, if you have to arrange your family affairs before you can serve the sentence).

The court may also increase the bond amount imposed on your bailor to make sure that you surrender yourself to the court on the start date of your sentence.

What Can You Do If You are Dissatisfied with the Sentence?

You can choose to appeal a sentence if you are dissatisfied with it. You must lodge a Notice of Appeal within 14 calendar days from the time the sentence or order was made. This includes weekends, but not the day the order was made.

For more information, refer to our article on filing a criminal appeal in Singapore.

Must You Engage a Lawyer to Help Write Your Mitigation Plea?

Engaging a criminal lawyer to help with your mitigation plea is not compulsory. However, a lawyer will be able to provide you information on the sentencing benchmarks and precedents that the court has imposed for the particular kind of offence that you have been charged with.

A lawyer can also draft a mitigation plea by highlighting the key factors that may show that you deserve a more lenient sentence.

Bearing these considerations in mind, you are strongly encouraged to consider engaging a criminal lawyer in Singapore to help you draft your mitigation plea.

Murder vs Culpable Homicide in Singapore (and Penalties)

Ragging and Bullying: Their Penalties and What Victims Can Do

Corrective Training and Its Consequences in Singapore

Mohamed Baiross
Sir Baiross's dedication, knowledge, and skill to the client’s cause made a complete recovery possible.
Read more

Gino Hardial Singh
After being advised by the police that an altercation I was involved in was being investigated, I reached out to…
Read more