Schemes of Arrangement: How They Work and How to Apply

What is a Scheme of Arrangement?

A scheme of arrangement is an agreement, between a company in financial distress and its creditors, to assist the company in fulfilling its debt obligations.

A scheme of arrangement works by restructuring the company’s debts and varying creditors’ rights.

For example, the creditors may agree to claim only a portion of instead of the full amounts owed to them by the company. In exchange, the company may commit to paying these portions of debt rather than defaulting on the entire debt altogether.

The scheme is subject to the court’s supervision and sanction. This means that a scheme will be binding on all creditors if the court approves the scheme. This is even if not all the creditors approve of the scheme.

Why Undertake a Scheme of Arrangement Over Judicial Management?

A scheme of arrangement is often preferable to a judicial management in various situations. These include:

Process of Effecting a Scheme of Arrangement in Singapore

The following infographic provides a quick summary of the application process for a scheme of arrangement: 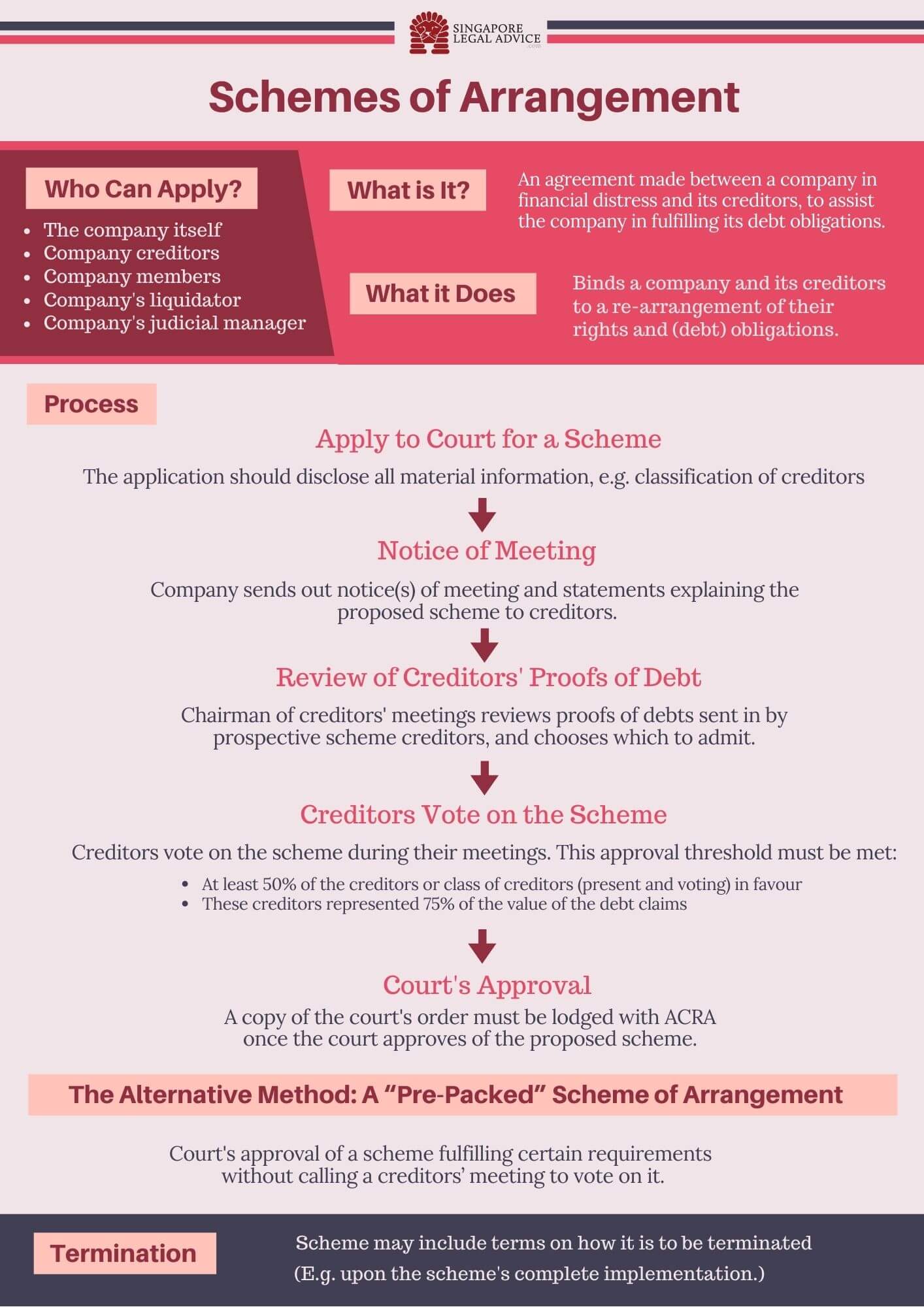 Who may apply for a scheme of arrangement?

The following persons may apply to the court to convene a creditors’ meeting for obtaining the creditors’ approval of the scheme:

When applying for a scheme, the applicant has to unreservedly disclose all material information to the court. This is to assist the court as it decides how the creditors’ meeting would be conducted.

Such material information includes any issues relating to a possible need to hold separate meetings for different classes of creditors. For example, where certain creditors have such different rights and interests from others that it will be inappropriate for them to consult each other on whether to vote for or against the proposed scheme.

Notice of Meeting and (if needed) appointment of scheme manager

If the court approves the creditors’ meeting, the company will send notice(s) summoning the meeting, as well as statement(s) explaining the effects of the proposed scheme to all creditors. A scheme manager may also need to be appointed by the company or court to administer and manage the scheme or facilitate negotiations.

Upon receiving these documents, prospective scheme creditors can submit their proofs of debt (together with any supporting documents) to the chairman of the creditors’ meeting. The chairman will then decide which debts to admit or reject.

The chairman’s list of approved creditors – and the corresponding amounts of their admitted claims – will be posted at the meeting venue before the meeting.

This classification is aimed at protecting minority creditors whose rights may be crammed down upon (i.e. forced into being bound by the scheme, also known as cross-class cram down) should they be outvoted.

At the same time however, the court has to ensure that not too many classes of creditors are created, or this could possibly lead to minority creditors being able to veto the scheme for no good reason.

After voting, the chairman will tabulate the votes and announce the results. If at least 50% of the creditors or class of creditors (present and voting) holding at least 75% in value of debt claims agree to the proposed scheme, the court will then decide whether to approve it.

Sanction by the court

For the court to approve the scheme, it must be satisfied that:

Where necessary, the court has the power to call for a new creditors’ meeting and order a re-vote before it decides whether or not to approve the scheme.

The court may call for a re-vote where, for example, there are objections to the approval process or terms of the scheme, but the court does not want to restart the entire scheme process and incur additional costs.

The court also has the power to approve a scheme, notwithstanding objections from dissenting classes of creditors, if:

Once the court has approved of the proposed scheme, a copy of the court’s order must be lodged with the Accounting and Corporate Regulatory Authority (ACRA). The scheme will then be binding on all creditors.

The alternative method: A “pre-packed” scheme of arrangement

Under the Insolvency, Restructuring and Dissolution Act 2018 (IRDA), there is also a faster and less costly method of implementing a scheme of arrangement.

Known informally as the “pre-packed” scheme, the court can approve a scheme fulfilling certain requirements even without calling a creditors’ meeting to vote on it.

The requirements of such a “pre-packed” scheme are:

Effect(s) of the Scheme of Arrangement

The effect(s) of the scheme of arrangement will depend on its terms.

For example, rights of creditors can be affected only if the scheme has expressly provided for this. The same applies to the alteration of third-party rights.

After a scheme has been proposed, the court may grant a moratorium (i.e. a temporary suspension of a certain activity) to restrain further legal action or proceedings against the company in question unless the court has granted leave for these proceedings to go ahead.

For example, the company may apply to the court under section 64 of the IRDA to restrain the commencement of certain legal actions, such as the:

After the company has applied to the court to restrain the commencement of such legal actions:

To ensure that creditors’ interests are protected, the court may also grant orders under section 66 of the IRDA to prevent the company from taking certain actions during the moratorium period. These orders can:

To successfully implement a scheme of arrangement, a company typically needs a fresh capital injection to continue operations and pay off short-term debts. However, distressed companies often face significant difficulties in obtaining rescue financing (i.e. essential loans) due to the risk of the restructuring failing, and the rescue financiers being unable to recover their loans. The lack of such financing then makes it much harder to maintain the company’s operations and would itself reduce the chances of a successful restructuring.

To encourage lenders to provide rescue financing, the court has the power under the IRDA to grant a super priority order to give rescue financiers priority over the other creditors if restructuring fails and the company is wound up.

In the most extreme cases, this could even provide rescue financiers with priority access to secured assets. However, the court will not make such an order unless it is satisfied that rescue financing cannot be obtained otherwise, and that there is adequate protection for the interests of existing secured creditors.

Alteration of a Scheme of Arrangement

Once sanctioned by the court, a scheme of arrangement is binding on all parties to the scheme and cannot subsequently be altered. This is even if the company’s shareholders and creditors agree to alter the scheme.

A scheme of arrangement can be overridden only by proposing an entirely new one and undergoing the whole approval process again.

Termination of a Scheme of Arrangement

The scheme may include terms on how it is to be terminated. For example, the terms of a scheme of arrangement may state that the scheme ends:

Schemes of arrangement grant companies in financial distress temporary relief from their debt obligations. As not all creditors have to approve the scheme for it to go ahead, this avoids the impracticability or even impossibility of procuring the unanimous approval of all creditors.

In certain situations, the scheme of arrangement may also prevent a minority of creditors from frustrating a beneficial scheme by withholding consent.

If you need legal advice on whether your company will benefit from undergoing a scheme of arrangement, feel free to get in touch with one of our corporate and commercial lawyers. 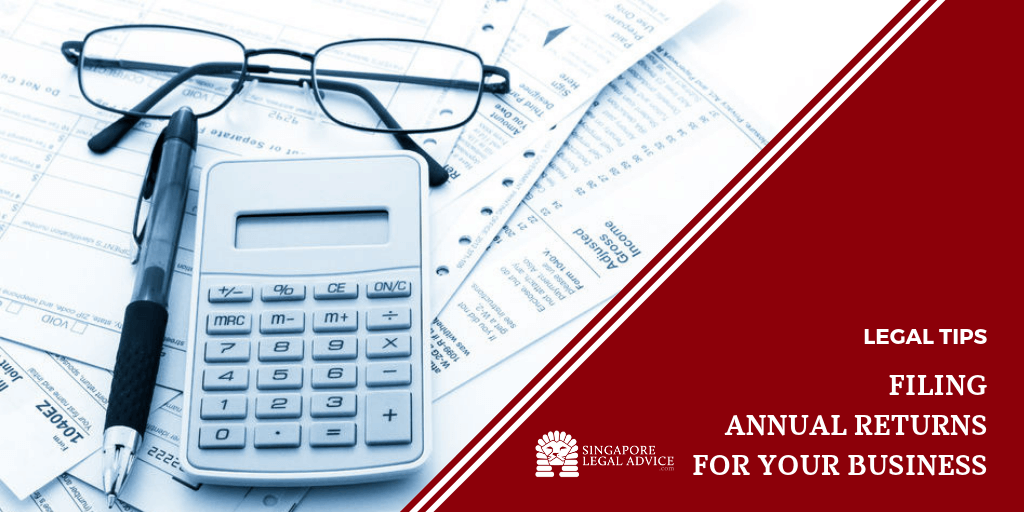 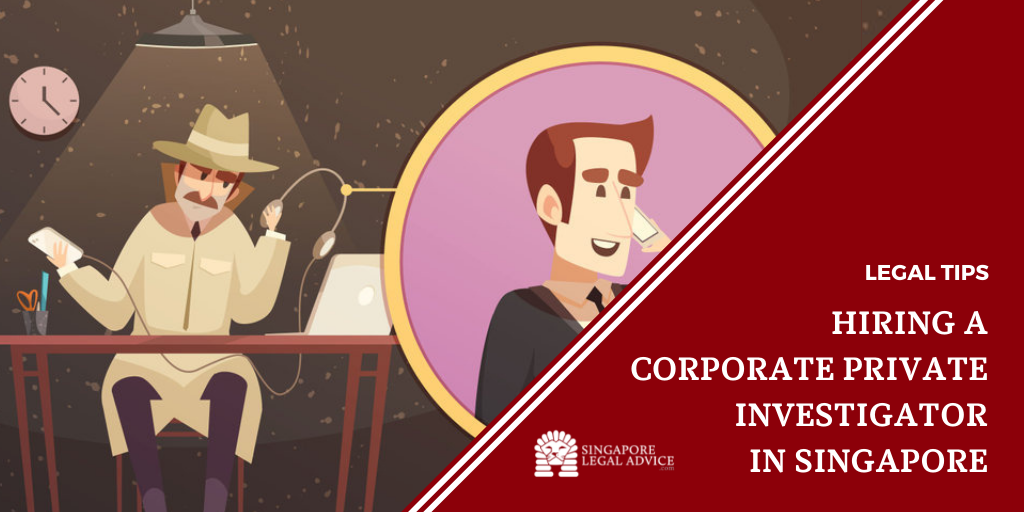 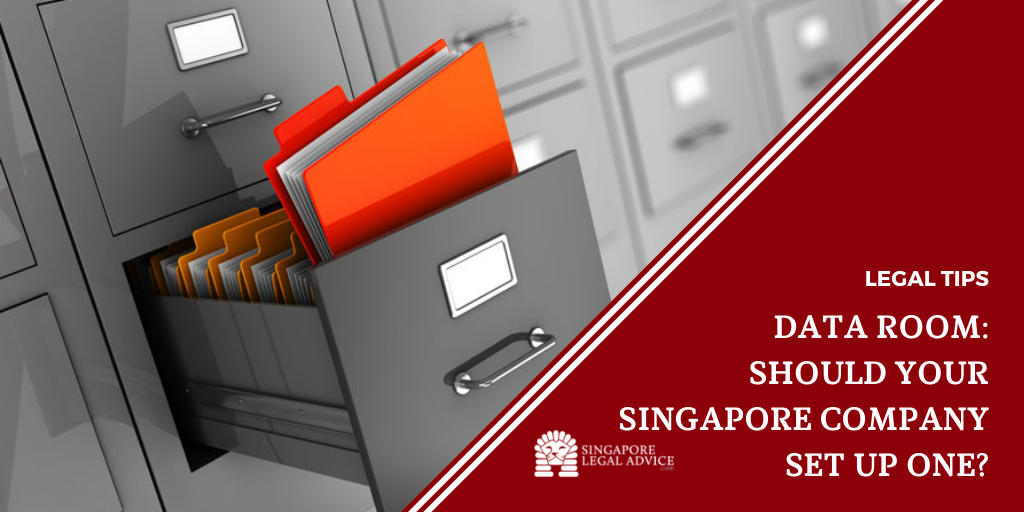 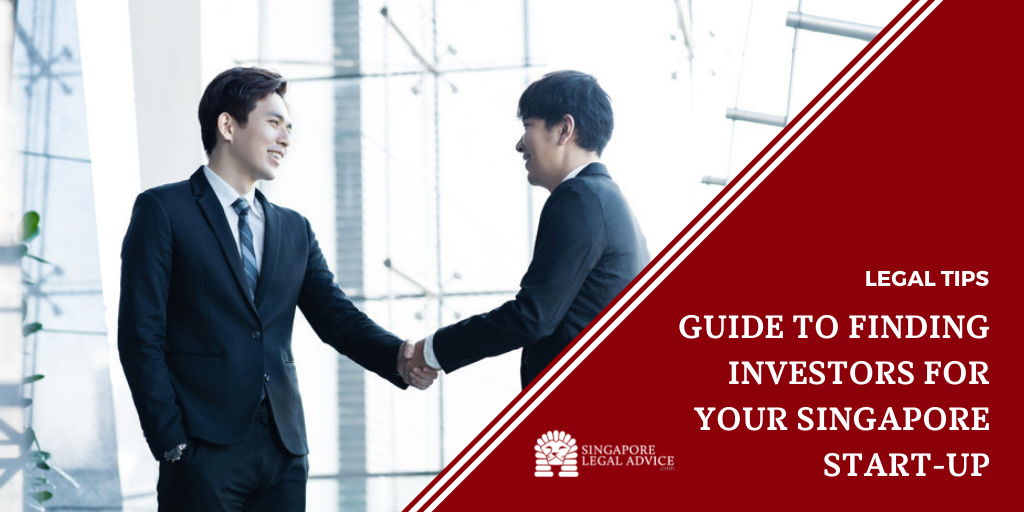 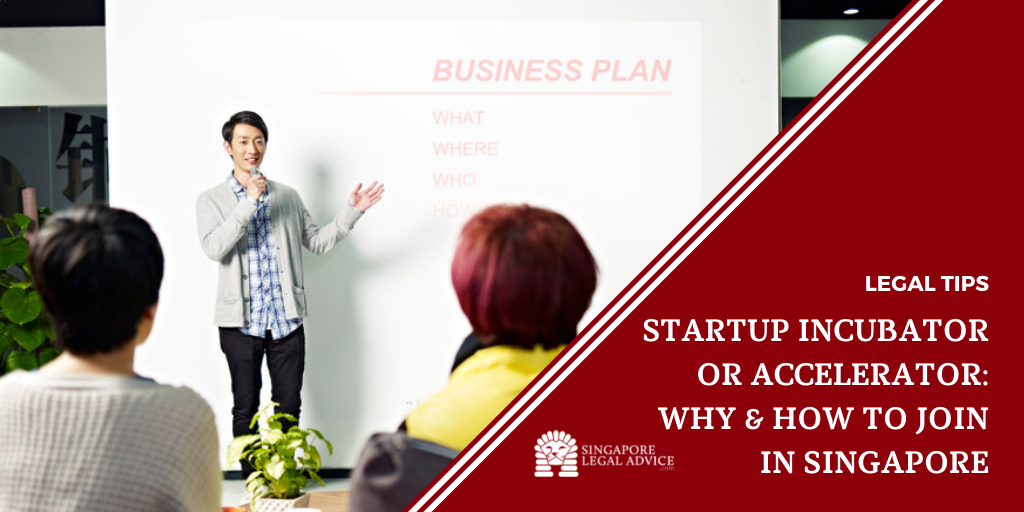