In Singapore, smoking is defined as the inhaling or expelling of smoke of tobacco or any other substance. This includes holding a lit or smoke-emitting cigarette or any other form of tobacco product.

What is the Legal Age for Smoking in Singapore?

This plan to increase the legal age for smoking is intended to de-normalise the use of cigarettes amongst adolescent youth, especially as most cultivate the habit between the ages of 18 and 21 years old.

Underage smokers caught smoking can be fined up to $300.

Where in Singapore are Smokers Not Allowed to Smoke?

Smoking is prohibited in the following places (non-exhaustive):

Orchard Road is also now a smoke-free zone. The areas affected are shown in red in the map below: 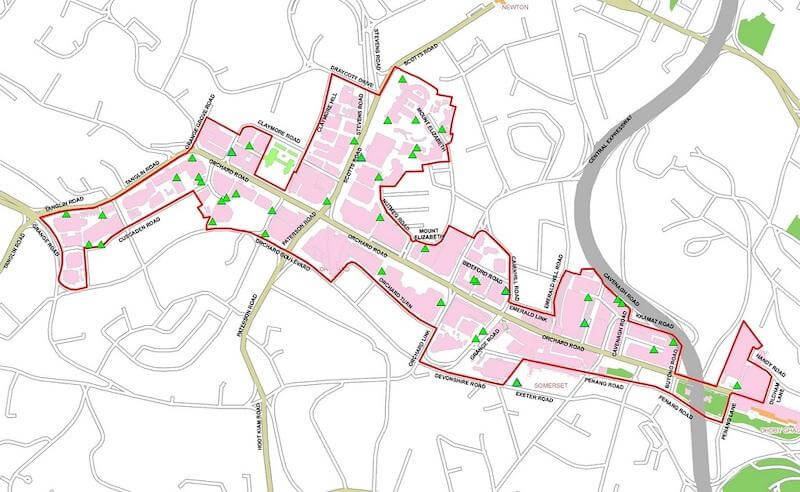 People who wish to smoke in Orchard Road will only allowed to do so within Designated Smoking Areas (DSAs) which have been marked out as yellow boxes.

The locations of the DSAs in Orchard Road can be found on the National Environment Agency’s (NEA) website.

For the months of January to March 2019, enforcement officers will be adopting a 3-month advisory period for smokers in the Orchard Area.

Enforcement officers will be wearing identifiable white “No Smoking Zone” polo T-shirts, and will issue verbal warnings or advisories to smokers who are smoking in areas of Orchard Road that are not DSAs.

From April 2019 however, enforcement action will be taken against all offenders.

If you are caught smoking in a prohibited place (whether in Orchard Road or some other location listed above), you are liable for a fine of up to $1,000.

In addition, people who litter cigarette butts can be fined up to $2,000 for first-time offenders, and up to $10,000 for repeat offenders.

Swipe ? to read about Singapore’s new smoking laws that came into force this year! ? – These changes were implemented as part of the government’s efforts to reduce the prevalence of smoking in Singapore. ? The legal age for smoking will also continue to be increased by one year every year, until it reaches 21 in 2021. ? – In other news, a group of Malaysians have filed a lawsuit for “smokers’ rights” against a nationwide smoking ban in public places. (Much like Singapore, those found guilty of smoking in banned areas in Malaysia will be fined, though repeat offenders face much higher penalties compared to first-time offenders – RM 10,000 (S$3,299) or jail for up to 2 years). The group that filed the suit claims argues that smokers will be “isolated” as a result of the ban, and that they have a fundamental right to smoke. ? – Though the outcome of this case is not yet known, good luck trying to bring a similar lawsuit to the Singapore courts. More likely than not, the legal fees you pay to fight the case will just go up in…smoke. ? ?#SingaporeLegalAdvice

A post shared by SingaporeLegalAdvice.com (@singaporelegaladvice) on Jan 9, 2019 at 12:10am PST

Places Where Smoking is Allowed

Smoking is allowed within DSAs such as those in open-air hawker centres, universities, or smoking rooms in the airport.

The NEA generally provides a list of areas where smoking is allowed. Such areas are normally explicitly demarcated with notices, overhead signs and/or markings on the ground.

Furthermore, you can smoke within your own home. Currently, there are no laws banning smoking at home as such laws could result in invasions of privacy at home.

You can also smoke inside your car as long as no second-hand smoke is expelled into places where smoking is prohibited. For example, when smoking in your car in a smoke-free zone such as Orchard Road, your car’s windows must be fully wound up.

In Singapore, it is illegal to import, distribute, sell or use any harmful tobacco products such as chewing tobacco, loose leaf tobacco, smokeless cigars, and dissolvable nicotine.

It is further illegal to sell, possess or use any imitation tobacco products that resembles or is designed to resemble a tobacco product. This includes e-cigarettes.

Before cigarettes can be imported into, and/or manufactured in Singapore, importers and manufacturers have to ensure that each cigarette is:

before the cigarettes are released for sale or consumption in Singapore.

The following is an illustration of how an SDPC cigarette might look: 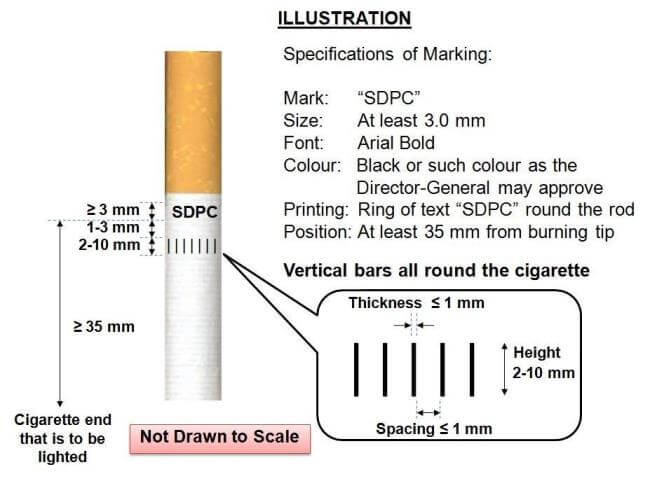 It is illegal to sell or smoke cigarettes that do not have such “SPDC” stamp in Singapore.

Anyone who imports into Singapore, or manufactures, such contraband cigarettes without the “SDPC” and vertical bar markings are liable for a fine of up to $5,000.

What Happens If You are Caught Smoking Illegal Cigarettes and/or in Prohibited Places?

Power of Police and NEA officers to arrest and serve notices

Police officers and NEA officers can arrest anyone who is suspected of smoking illegal cigarettes or smoking in prohibited places, without any warrant, and produce them before the court or to the police station.

The officers can also demand for proof of identity and search your bags as required.

If upon arrest, the officers are satisfied as to your identity, name and place of residence, they may serve upon you one of the following notices:

If the notice comes with an offer of composition (i.e. it states a sum of money that is to be paid), you can settle the offence without having to attend court by paying the composition. If there is no sum stated, you would need to go to court.

Payment of composition can be made up to 3 working days from the day of the offence, failing which a warrant can be issued for your arrest. You can make the payment through an AXS station, with a credit card via NEA online payment or at the NEA customer service centre.

A warrant of arrest will be issued against you for late payment or failure to show up in court when you are served with a Notice to Attend Court.

More importantly, if you obstruct an officer from carrying out their duties such as searching your premises or confiscating your illegal tobacco products, or if you provide false statements to the officers, you can be arrested and sentenced to a fine of up to $10,000 and/or jail for up to a maximum of 12 months.

Power of citizens to report offenders to NEA

Citizens are given the power, and are encouraged, to report you to NEA if they see you smoking an illegal cigarette or smoking in a prohibited area.

Furthermore, managers of establishments (where smoking is prohibited) are allowed to ask you to leave the premises if you are caught smoking in their premises.

Can I Appeal Against Any Fine for Smoking?

Yes, you can appeal against your smoking fine. However, it is important to note that the majority of appeals are rejected.

If you intend to appeal against your fine, you should have a strong reason (e.g. financial difficulty or medical reasons) for doing so and be able to support your appeal with sufficient documentary evidence.

Can I Bring Cigarettes into Singapore from Overseas?

Declaring of cigarettes to customs

You can bring in cigarettes to Singapore (up to 400 grams) from overseas, but it must be declared to customs. There is no GST relief or duty-free concession for tobacco products in Singapore.

First-time offenders who fail to declare or incorrectly declare their cigarettes, even open packets, can be fined up to $200 per box or per 20 sticks or part thereof.

Permit required for importing more than 400 grams of cigarettes

If you are carrying more than 400 grams of cigarettes, you need to present a Customs Import Permit, mainly the Customs In-Payment “Duty and GST” (IPT-DNG) permit. Application for the permit must be done on the TradeNet website.

Only businesses can apply for the permit as you need to register with the Accounting and Corporate Regulatory Authority (ACRA) prior to creating a Customs Account.

More information on how to apply for the permit can be found on the Singapore Customs website.

Anyone who imports contraband cigarettes into Singapore can also be liable for a fine of up to $5,000 (as mentioned above).

Composition Offers and Fines for Criminal Offences in Singapore

Can I Use the Defence of Intoxication in Singapore?

Road Rage: What is It and How are Offenders Sentenced in Singapore

Hire the Best Criminal Lawyer For Your Case in Singapore

Mohamed Baiross
As matter is confidential, I will not elaborate sensitive issue publicly. Due to his commitment, the matter has already been…
Read more