Striking Off a Company

What Does It Mean to Strike Off a Company?

Striking off a company’s name from the register simply means deregistering the company from the Register of Companies. The eventual outcome is that the company will be dissolved.

Striking off may occur on the own motion of the Registrar of Companies (i.e. ACRA). One may also want to strike off a company’s name from the register when the company has ceased business or trading, or when the objects of the company (i.e. the purpose for which the company was set up) has ceased to exist.

Striking off does not absolve the company’s officers and members of their liabilities, if these liabilities had not been completely discharged.

If a director of the company being struck off had also been the director of at least 2 other companies already struck off over the previous 5 years, that director will be disqualified from taking part in the management of any company for 5 years after the current (and third) company is struck off.

What is the difference between striking off and winding up?

Winding up is another way of closing a company. However, it is a more formal process that involves the appointment of a liquidator to manage the company’s closure, such as the realisation and distribution of company assets and payment of remaining debts.

If the company to be closed is not in active business, or does not have any assets or liabilities, it would be cheaper and faster to strike it off instead of winding it up.

However if the company is insolvent, it can only apply to be wound up instead of struck off.

That said, a company being wound up may also be struck off by the Registrar when:

Striking Off a Company: Registrar’s Own Motion

The Registrar may strike a company off the Register on his own motion when he has reasonable cause to believe that the company is not carrying on business or is not in operation.

The Registrar will first send a letter to the company and its officers (e.g. directors, secretaries and members) requiring them to reply with proof that the company is still in business or still in operation within 30 days of the date of the letter.

If no such reply is received, the Registrar will publish a notice of the company’s impending striking off in the Gazette. A copy of this notice will also be sent to the company by registered post. The company then has 60 days from the date of the notice to provide proof that the company should not be struck off.

Once this notice is published, the company is officially dissolved.

Striking off a Company: Application by Company

This diagram illustrates the key steps and stages involved in a striking off application. The entire process, if there is no appeal, will take at least 4 months. 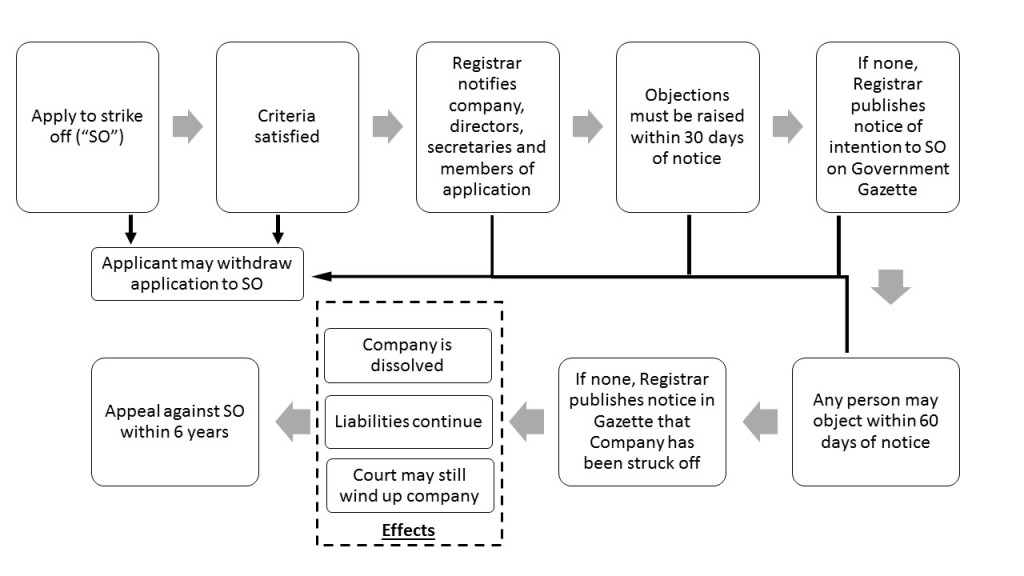 Who in the company may apply to strike it off?

The (majority of the) company directors, the company secretary or the registered filing agent can submit an online application via BizFile+ to strike off the company. No filing fee is payable for this transaction.

What criteria must be satisfied?

The Registrar can allow the striking off of the company’s name on such grounds and subject to such conditions as may be prescribed. They are:

It may be useful to seek legal advice on whether these criteria have been met to prevent a rejection of one’s application, as well as to pre-empt any possible objections.

Objections to the striking off application

Objections to the striking off application may be made within the specified periods under section 344C of the Companies Act (CA). Any objections may be made on BizFile+. No filing fee is payable for this transaction.

Upon receipt of such notice, the Registrar will notify the company and post a notice on ACRA’s website that the application has been withdrawn.

Effects of Striking Off

Appeal against Striking Off

An application maybe made to restore the company’s name to the Register after it has been struck off under section 344D CA. An application may only be made by a former director or former member. It must be made within 6 years after the dissolution of the company.

The name of a company may also be restored to the Register even if the company itself had applied to be struck off.

Should you require further assistance with striking off your company, please feel free to engage our services, offered at competitive rates.