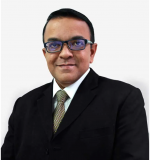 Called to the Bar in 2007, Mr. Abdul Aziz Bin Abdul Rashid is a Senior Partner and Head of Muslim Law Practice at I.R.B. Law LLP.

Mr Abdul Aziz has over 14 years of experience in Muslim law practice in Singapore, including advising and representing clients in matrimonial proceedings (divorces, marriages, etc.), probate matters (inheritance and succession issues) and estate planning including the drafting of Muslim wills (wasiat), hibah and nazar. He holds a law degree from the National University of Singapore and heads a team of lawyers in the firm who handle both contentious and non-contentious Muslim law matters.

Mr. Abdul Aziz has represented clients from all walks of life and offers his best in every case he handles, big or small, simple or complex. His work has brought him to argue cases before the Syariah Court of Singapore and the Appeal Board both constituted under the Administration of Muslim Law Act (Cap. 3), the State Courts, the Family Court and the High Court.

Among the more complex issues of law dealt with by Mr. Abdul Aziz in the matters handled by him was the issue of whether the ruling of the Singapore Court of Appeal in UDA v UDB [2018] SGCA 20 relating to the power of the court to deal with third party interests in divorce proceedings in the civil courts should also be applied to divorce proceedings in the Syariah Court. The Appeal Board decided this issue in favour of Mr Abdul Aziz’s client.

As one of the founding members of the Association of Muslim Lawyers, Mr. Abdul Aziz was entrusted with the task of drafting the association’s constitution. In 2008, Mr. Abdul Aziz started the “Legal Clinic @ Mosques” scheme which provides free legal consultation and advice at 5 mosques situated at various locations in Singapore for both Muslims and non-Muslims. Mr. Abdul Aziz has also spoken on matters of Muslim law on Mediacorp’s “Warna 94.2” radio station several times.

Flowing from his keen interest in Muslim law practice in Singapore, Mr. Abdul Aziz is presently writing a collection of digests of cases decided in the Syariah Court and the Appeal Board which he hopes will when completed, be a source of reference of Muslim law for both legal practitioners and the public in Singapore.

Mr. Abdul Aziz is also actively involved in training members of his team to ensure that the firm consistently provides top-notch yet affordable services to clients.

Mr Abdul Aziz has written several articles on various subjects of concern to Muslim law practice which are published in the firm’s website.