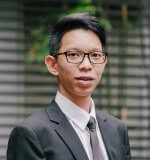 Jing Yen practices in a specialist dispute resolution firm and has to-date successfully argued cases as lead counsel in both the State Courts and the High Court in addition to having acted as assisting counsel in the Court of Appeal. His keen eye for detail and ability to juggle competing perspectives gives him a particular strength in civil litigation matters. He also has extensive experience in criminal matters and often accepts assignments to act pro bono from the Criminal Legal Aid Scheme (CLAS) and the Legal Assistance Scheme for Capital Offences (LASCO).

When he is not litigating, Jing Yen indulges in real-time strategy games and reading philosophy.

I must said that Mr Chooi Jing Yen is a very helpful and attentive lawyer even to a stranger that called to ask legal advices. Giving advice professionally Deeply appreciate.

The degree of professionalism in regard to our case is second to none. Jingyen have been most helpful and supportive through this difficult time. All of our calls and correspondence have been returned or answered in a very timely fashion and extremely respectful. The whole experience was so much easier on us because of Jingyen, I would not hesitate to recommend you to friends and anyone in need.

Jing Yen have been helpful and does help in our case and he is always prompt in replying. We really appreciate his help.

The Court of Appeal (CA) had to decide whether to set aside a matrimonial consent order entered into more than 17 years ago, on the basis of fraudulent and material non-disclosure by the Husband. Presented with the opportunity to consider the ramifications of recent pronouncements on this issue by the UK Supreme Court (viz Sharland v Sharland [2016] AC 871 and Gohil v Gohil (No 2) [2016] AC 849), the Singapore CA eventually held that the present case failed on the facts and evidence. The possibility therefore remains that the developments in the UK may still arise to be considered in Singapore in the appropriate case.

Persuaded the High Court to grant an order recognising that one Masahiko Nishiyama had been adjudicated bankrupt in Japan, and appointing one Hiroshi Morimoto as his Trustee in Bankruptcy. This allowed the Trustee to proceed to seize SGD 124 million worth of assets that Nishiyama had hidden in various Singapore bank accounts in the names of his wife, son and other offshore corporate entities for the express purpose of evading his creditors. This groundbreaking case marks the first time that the Singapore Court has recognised a foreign trustee in the bankruptcy of an individual by a foreign court.

As lead counsel, successfully discharged a Mareva Injunction against our client on the basis that the opposing party had not produced solid evidence that there was a real risk that our client was about to dissipate $2.9m worth of assets.

Assisted in the 17-day long trial of two co-accused persons who were convicted of committing criminal breach of trust and abetment of criminal breach of trust respectively. The subject-matter was a Kobelco crane valued at about $640,000. The trial involved vigorously disputed matters of fact that necessitated extensive cross-examination of both prosecution and defence witnesses.

Defended an appeal brought by the prosecution against a sentence of 10 months’ imprisonment meted out to a repeat theft offender suffering from Fetishism. The judgment written by the Honourable Chief Justice grapples with the principles of proportionality and specific deterrence and is now an important part of the jurisprudence on criminal sentencing. Media coverage: Chief Justice dismisses appeal for higher sentence for man with fetish for stealing women’s wallets

Will be tailored to suit your needs.