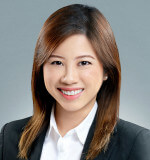 Dorothy Tan is an accomplished and much sought-after divorce lawyer in Singapore.  She is the Deputy Head of the Family Law Department in PKWA Law.

Dorothy was shortlisted for “Young Lawyer of the Year’ by Asian Legal Business at the SE Asia Law Awards 2017.  She is the sole Family Lawyer to be nominated.   ALB is owned by Thomson Reuters and provides authoritative and independent insight into the legal profession in Asia Pacific and the Middle East.

Dorothy was named by Asian Legal Business 2016 listing as one of Asia’s 40 brightest young lawyers in its “40 under 40 – Asia’s Brightest Young Legal Minds.” The ALB list names 40 top lawyers under 40 years of age based on quality and complexity of work, career achievements, as well as recommendations from clients and superiors.

Dorothy is also listed by Singapore Business Review as one of Singapore’s most influential lawyers aged 40 and under in 2016. She was selected from a list of almost a hundred nominees based on thought leadership, influence, and success.

She is one of the youngest lawyers to lead a team and to successfully argue a landmark case at the highest court in Singapore, the Singapore Court of Appeal.

A divorce specialist, she is much sought-after by both men and women for her expertise in family law.  She has extensive experience in all aspects of family and divorce law. She has acted as lead counsel for clients in all areas of matrimonial law such as contentious divorces, division of matrimonial assets, disputes over child custody, and maintenance for wives and children.

Dorothy regularly receives positive and glowing feedback from her clients. One client commended her for her “faith, knowledge and determination”.   Another client wrote that Dorothy’s “judgements and ability to steer the various proceedings were absolutely critical. I was able to give you my full trust. You have certainly made a lasting impact, one which I will not forget.”

Dorothy studied at the tops schools in Singapore. She is well liked and respected by her peers. She has always held leadership positions, including being elected as Law Club President at the Law Faculty, National University of Singapore. She is currently the Deputy Head of PKWA Law’s Family Law Department and will become a director at the firm this year.

I turned to Dorothy to assist me where all others had failed. I had four previous lawyers, who either dismissed me, took easy options, or ignored the facts of my case. In desperation to seek justice, and in my hour of need, I was recommended to PKWA. Dorothy Tan LISTENED to my case, and worked tirelessly over the holidays and weekends to meet impossible deadlines. A very upsetting and stressful time but I will be forever grateful as Dorothy believed in my case and sought a fair and just resolution against insurmountable odds. At every juncture, Dorothy provided realistic, honest assessments and I proceeded based on her recommendations. If Dorothy and her team decides to champion your cause, you should consider yourself very fortunate.

I wanted to express my gratitude for your efforts and dedication for my case. It was quite a long and upsetting process. I am grateful to you that you took all the stress and restored everything out for me. Your faith, knowledge and determination were something that solves my worries.

Dorothy, a big thank you for all the support, guidance and recommendations you have given me. Your judgement and ability to steer the various proceedings were absolutely critical. I was able to give you my full trust. You have certainly made a lasting impact, one which I will not forget.

Please allow me to express my heart-felt, sincere thanks to Ms Dorothy Tan . Talking to Ms Dorothy during those occasions when we met in your office always left me with positive feelings and renewed confidence in how my case was being dealt with and progressing. I feel very honoured and privileged to have pictures taken with such great yet humble professionals as Ms Dorothy Tan. Well Done!!

Dorothy Tan is ranked as a Leading Family and Divorce Lawyer in Singapore (Doyles Guide 2016) and one of the youngest lawyers to lead a team and to successfully argue a landmark case at the highest court in Singapore, the Singapore Court of Appeal.

Dorothy was selected by a client (the husband) to be the lead counsel in a complex and difficult case involving the division of multi-million dollar assets. The case was heard before a court of 3 Appellate Judges at Singapore’s highest court, the Court of Appeal. Dorothy won the appeal and that decision has become one of the most important cases in Singapore divorce law because the Court of Appeal reaffirmed and summarized the new Singapore law on division of matrimonial assets (Twiss, Christopher James Hans v Twiss, Yvonne Prendergast [2015] SGCA 52].