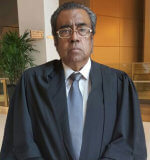 MR SINGA RETNAM IS A CONSULTANT AT I.R.B LAW LLP. He graduated from the National University of Singapore with a Bachelor of Arts Degree before proceeding to read law at the Inner Temple, London, eventually graduating as a Barrister-at-Law.

Mr Singa Retnam has accumulated an immense wealth of experience while practising law in Singapore for over 40 years. His long list of credentials are on a league of their own, with only a very few other prominent lawyers with similar vintage.

Mr Singa Retnam is well-versed in various areas of law but not limited to areas such as Civil Litigation, Criminal Litigation, Family Law, Debt Recovery and Personal Injury. His vast experience allows him to handle a broad spectrum of cases and further allows him to be a versatile consultant to I.R.B Law LLP as he understands the finer nuances of matters and thus he can provide robust solutions to his clients quickly and efficiently.

Mr Singa Retnam has also litigated a variety of cases in his legal practice, of note, are his practice in Administrative Law and Criminal Law. Among the early cases that he defended included doctors with medical malpractices and negligence, lawyers and police officers when they faced disciplinary tribunals and has successfully got them acquitted.

Mr Singa Retnam is also no stranger to the Court of Appeals and the High Court. Of the over 800 cases that the esteemed Yong Pung How has enacted judgement in his 16 years as Chief Justice, Mr Singa Retnam has appeared before him on several occasions, of note are cases of Murder, Rioting, Outraging Modesty, Criminal Force, Corruption, Grievous Hurt, Assault and Trafficking of Controlled Drugs which he has defended his clients for. He has also concluded countless Civil and Arbitration cases as set out above from the State Courts, the High Courts and to the Court of Appeal. His wealth of experience allows him to handle a broad spectrum of cases from civil to criminal cases.

Mr Singa Retnam has represented both local and international clients and serves individuals from all walks of life as well as corporate entities regularly. As a patient and compassionate man, Mr Singa Retnam’s practice is all about client care and robust representation of his client’s interest. Being both a Notary Public and Commissioner for Oaths, Singa Retnam is widely considered as one of Singapore’s most revered counsel of choice and a veteran in the legal profession.

Mr Singa Retnam is assisted by teams of lawyers and paralegals for each and every one of the abovementioned areas of practice, as such you will find that YOU still get the full services and quality of work expected from a larger law firm but at the competitive price of a smaller law firm.

Singa Retnam has handled countless high-profile and complex matters. His notable cases include:

For each of the above areas of practice, competent teams of lawyers and paralegals are always on hand to assist Mr Singa Retnam. This enables him to assist you diligently and effectively and ensures you receive the full services of a big established firm at the competitive prices of a small firm.

As a people’s person and an all-rounded lawyer, Mr Singa Retnam makes it a point to make sure his clients understand the situation they are in, advising them in a manner that is easily understood. He works hard to keep his services affordable for the common man and is transparent and honest in his assessment of your cases.
View More

Open Verdict in Death Plunge of Girl at Hotel

Insurer of a Car Crash Agrees to Pay Victims

He leads police to loot at hotel

From French Jail to Singapore lock-up