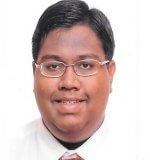 Siraj is a lawyer with particular expertise in Criminal Defence. Siraj honed his expertise in criminal litigation over the past 2 years as a Criminal Legal Aid Scheme (“CLAS”) Fellow. He has acted for close to 100 clients over a range of Penal Code and non-Penal Code offences (including white collar and regulatory offences) before the State Courts and Supreme Court in Plead Guilty mentions, Magistrates Appeals and several State Court trials. He has secured conditional warnings, acquittals (both at the pre-trial and post-trial stage) and community-based sentences/probation for adult offenders who have committed serious offences (ex. CDSA, Housebreaking & Rioting Offences). Siraj is a member of the Criminal Legal Aid Committee at Law Society Pro Bono Services and has also given talks on criminal law to various community stakeholders.

Siraj is able to provide assistance at any point of the criminal justice process from the investigations/pre-charge stage up to trials and appeals.

The range of matters Siraj has dealt with is extensive and includes:

Siraj has been very helpful from day 1. Sincere services rendered. Thank you.

Siraj has been very supportive and sensitive towards my concerns regards to my case. If you want a lawyer that you can rely on, its definitely Siraj as he will tirelessly find every option to ease your worries on your case!

Mr Siraj help me through my most difficult times of my life. He defend me whole heartedly. He is patient and show me a lot of concern. He will go through every single detail and ask me for opinion. Thank you for defending me.

Highly satisfied with Mr Siraj’s services. He is definitely a great attorney who serves from his heart, giving me advices and what outcome to expect. Would not hesitate to recommend him to anyone else in the future!

“Man jailed for culpable homicide after evading police since 1986 because of misspelt name.” – TODAY, 15 July 2019