Stop Couple Fights With Your Spouse Using These 10 Steps

In relationships, we cannot avoid conflict, and this is especially true in a marriage. So how do you stop couple fights? Here are 10 ways you can follow.

Nobody in a relationship wants to fight, even though some people may say it can be healthy for couples to argue every now and then. But what do we do when fights become relationship-threatening? How do you stop couple fights?

“Everyone in a relationship argues,” Debbie Mandel, author of Addicted to Stress, says. “However, how loudly you scream or how frequently you fight does not predict the outcome of your marriage.”

Some people like fighting or arguing, which they later make up for with sex or affection. But some couples leave a fight feeling angry, bitter and resentful. Sometimes it escalates. It’s often better for the couple to re-evaluate their relationship together or with the help of a therapist or psychologist.

Stop couple fights because your health could suffer

A Brigham Young University study, tracing couples over two decades, found that more arguments correlated with poorer health — and concluded that couples who don’t argue actually live longer. While a happy relationship has long been connected to good health, this research shows that arguments could take a serious toll.

If fights are common in your relationship, you don’t have to be overly concerned. There is a technique that can help resolve conflicts between couples, even if it means temporarily dropping your side of the fight and letting go of all the pent-up, self-righteous rage at its peak moment.

And any couple can learn this technique, making them feel better and more empowered.

A tool to stop couple fights

Dr. Lisa Firestone, a clinical psychologist, author, and the Director of Research and Education for the Glendon Association, recommends a tool she introduced to every couple she works with.

The tool is called unilateral disarmament.

“What it involves is momentarily dropping your side of the debate and approaching your partner from a more loving stance,” Firestone begins. 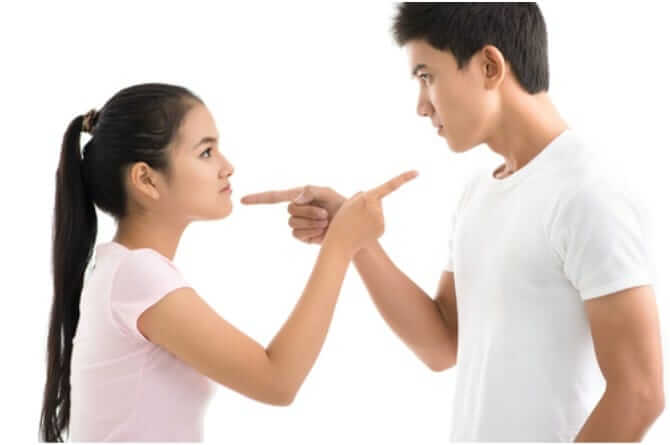 “The idea is that when couples have tension between them, perhaps from not communicating successfully or directly, they start to build resentments toward each other, which often reach a tipping point. An argument begins, then escalates based on an overflow of pent-up frustration and flawed communication. Heated moments are, however, the worst times to try to solve problems or make our points heard. They leave us saying things we regret or don’t even mean.”

According to Firestone, it involves shifting your focus from your partner’s words and behaviours to your own. After all, the only person you can control in a relationship (or an argument) is yourself.

All you can do in a moment of tension is to control and soften yourself and take a more vulnerable and open approach to your partner.

How to stop couple fights

No, this is not a typo. Several therapists and couples say forget that adage about always resolving anger before turning in — and let someone sleep on the couch. “We’ve found that going to bed angry is often the best choice,” says Lisa Earle McLeod, author and a 23-year marriage veteran. “It allows partners to clear their thoughts, get some sleep, and make a date to resume the fight (which might seem less important in the light of day).”

2. Own up to your part of the fight

Melody Brooke, a licensed marriage and family therapist, says two things derail intense fights: 1) admitting what you did to get your partner ticked off and 2) expressing empathy toward your partner. Brooke, author of The Blame Game, says this can be difficult but is typically extremely successful. “Letting down our defenses in the heat of battle seems counter-intuitive, but it is actually very effective with couples.”

3. Shut up and touch

Brooke says there’s a point where discussing the matter doesn’t help. So couples need to just hold each other when nothing else seems to be working. “Reconnecting through touch is very important.”

Jane Straus, author of Enough is Enough! Stop Enduring and Start Living Your Extraordinary Life, says couples often derail a resolution when they acknowledge the other partner’s position and then add a “but” in their next breath, reaffirming their own. An example: “I can understand why you didn’t pick up the dishes in the family room, but why do you think I’m the maid?”

“We soon realized that we don’t have two beings in a marriage,” Jacqueline Freeman says.

“We actually have three: me, my husband, and the marriage. And we have to take good care of all three. So if we’ve been arguing about whose fault it is that the house is so messy, I might defend myself saying I was busy working on a project that will bring in more income, and he might say he was busy fixing something on the house that was broken.”

“We used to be able to carry on a conversation like this for quite some time. But over the years, we seem to have developed a 15-minute timer for arguing. [Then] one of us will suddenly remember the key question: What’s best for the marriage?”

6. Relax and take a break

Even a 30-second break can help a couple push the reset button on a fight, licensed clinical counselor Timothy Warneka says. “Stop, step out of the room, and reconnect when everyone’s a little calmer.”

At times when you’re triggered, you may feel yourself start to experience increased arousal, as if you are heating up. At these moments, you may hear your inner critic coaching you to take destructive actions, like lashing out at your partner. Respond by calming yourself down, maybe by taking a series of deep breaths or counting back from 10.

You can get a hold of these moments and learn to pause. For example, you can choose between intimating and violating, between addressing your partner from a loving stance and talking calmly or from an angry, punitive point of view and yelling.

Whatever your technique for getting back to yourself with the higher functions of your brain online —perhaps taking a walk or listening to music — find a way to get centred in yourself before you respond. Think about what your goals are for your relationship and make your actions ones that will move you toward those goals.

Couples often know what to say to each other to trigger the other person. To stop couple fights, resist making these statements or taking the bait. Remain who you want to be regardless of how your partner is acting.

You can take responsibility for your own behaviour instead of handing over your personal power to your mate, i.e. “she/he made me act like that.” When you do this, you can feel good about yourself, because you did not end up saying a lot of hurtful things to your partner, which may have caused lasting damage to the relationship. 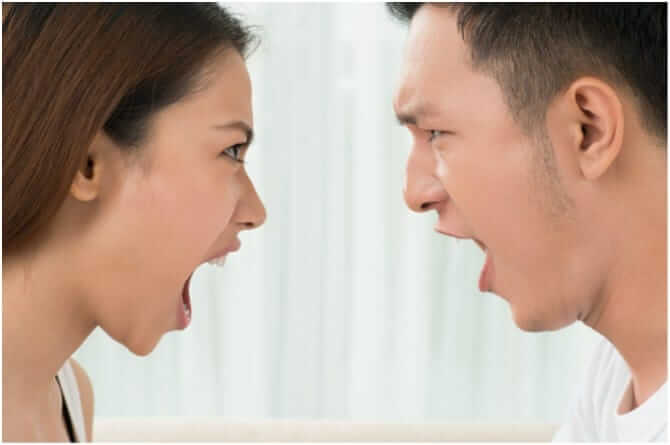 “I don’t want your action figures on the mantle!”

Try to listen to your partner’s feelings, irrational as they may seem to you in that moment. Then, say something warm and understanding. Stress that it doesn’t really matter who’s right. A recent Baylor University study showed that fights between couples have a lot to do with power. 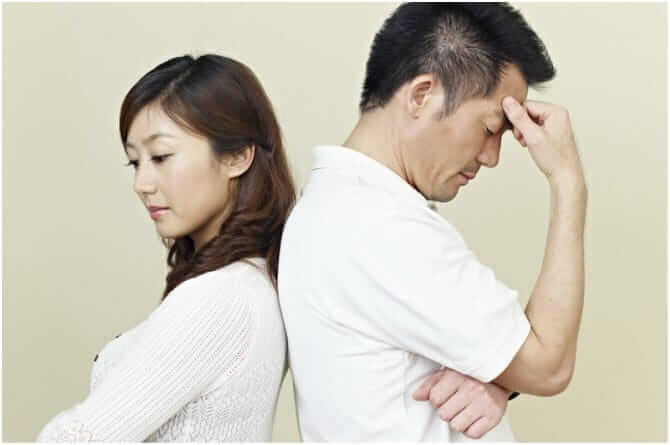 “Please brush your teeth before you go to bed.”

Laying down your arms does not mean giving up your power, or taking the easy way out.  It is actually incredibly hard to do and takes a lot of personal strength, but it is worth it.

It means taking a more vulnerable stance that won’t be perceived as threatening and will have a softening effect on your partner. To stop couple fights, put a hand on your partner, look them in the eye and say something from your heart, like “I care more about being close to you than having this fight.”

Sometimes, a small act of affection is all it takes to disarm your partner. Looking your partner in the eye, taking his/her hand and clearly communicating your goal of being close to him/her is an act of vulnerability that is hard to disregard. Taking this action will often melt your partner’s heart and allow him/her to be more vulnerable and open with you.

To stop couple fights, you can put yourself in your partner’s shoes and empathise with what he/she is feeling. For example, if your partner is jealous because you stayed out late with friends instead of doing something with him/her, you could say something that affirms her feelings then acknowledge your mistake.

“It seems like this makes you feel insecure. I’m really sorry about that. It is not my intention to hurt you or be untrustworthy. Spending time with my friends doesn’t mean I am rejecting you, or that I don’t care about you. But I can understand how it looked that way from your perspective.”

It’s important to note that the technique of unilateral disarmament does not imply that you are surrendering your point of view. It’s not giving in to emotional manipulation, taking the blame or deferring to your partner’s opinion.

It simply indicates that you value being close to your partner more than winning your specific point. You can come to appreciate that you are two separate people with two sovereign minds, who may see any event or situation from a very different perspective.

Each of your points of view is shaped by your past experiences, and you can have compassion and understanding for both yourself and your partner.

10. Communicate how you feel

“Name it to tame it” is a technique by which you label your feelings and actually calm them down. The first step to stop couple fights is to tune in to what you are actually feeling in the moment. You can then acknowledge or share with your partner what is going on for you and how you saw the situation. 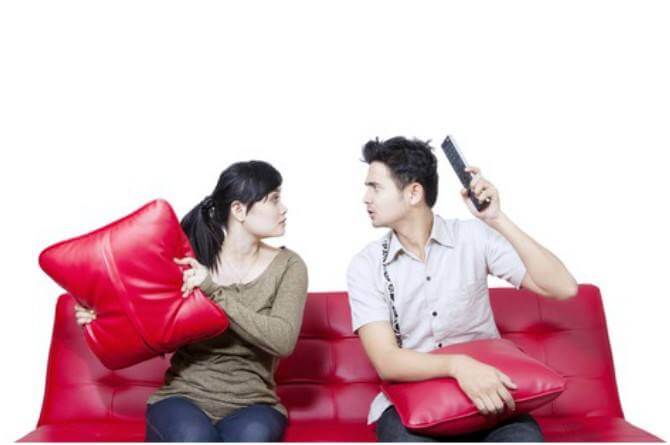 You can take the risk of being honest and open about your feelings. For instance, you could tell your partner, “I felt hurt and put off by your jealousy. It makes me feel bad that you don’t seem to believe how much I care for you, and that makes me feel distrusted and pushed away. My goal is to be close to you, but I don’t want to give up my other friends; they are really important to me”

When you communicate with your partner, be attuned to all the ways you’re expressing yourself, both verbally and non-verbally. What’s going on in you when you talk to him/her? What do you feel?

Notice your nonverbal signals, your body language, tone of voice, the timing and intensity of your words. Pay attention to how you communicate has an impact on your partner.

If your body language is different from your verbal message, you are sending a double message to your partner. Parents, please, this is confusing. It would be important to recognise if you have ambivalent feelings. Share both feelings with your partner directly, allowing for honest communication.

The more you communicate honestly and directly yet with compassion, the more you can stop couple fights. Also, your relationship with your partner will become closer and stronger. Each of you will be less likely to build a case against the other. And grudges that are waiting to resurface during your next conflict will become a thing of the past.

Therapists also say that it’s important to realise that no marriage is perfect and that fighting is often part of the ebb and flow of compromise.

When you or your partner put these tips into action, you will relate to each other as two equal individuals, with respect. And with fewer couple fights, perhaps you will even live longer.

YOU CAN ALSO READ: Study: Couples who fight are happier than those who don’t