Paedophiles are watching: These hashtags are putting your kids in danger

A simple act like using hashtags on Facebook can endanger your kids’ safety according to a report by Child Rescue Coalition. Learn more here…

As parents, we feel proud of every little milestone our kids have achieved, and we love sharing pictures of our little ones on social media. But did you know that some of the most innocently used hashtags can give paedophiles access to our kids’ pictures and put them in danger?

Child Rescue Coalition, an organisation that aims to protect children from sexual exploitation, has shared a list of more than 100 common hashtags that paedophiles often look for, to find photos of children.

You’ll be shocked to know that the list includes innocent hashtags like #bathtime, #splishsplash, #kidsbathing and #pottytrainingfun, among others.

Dangers of using hashtags on Facebook while posting your kids’ pictures

“Sharenting”, a combination of sharing and parenting, has now become extremely common and “normal” with an increasing number of mums and dads posting photos and videos of their children online.

According to Child Rescue Coalition, by the age of 2, 90 percent of children already have a presence on social media.

These are innocent, cute pictures that parents have posted with the best of intentions but unfortunately, a predator’s mind works in dangerous ways. A paedophile can manipulate even the most harmless of pictures to make them look sexual.

Hashtags are commonly used to look for posts, pictures or videos based on specific themes or categories. For example, if you are renovating your house, you can search for ideas and inspiration using the hashtags #homedecor #interiordesign etc.

Paedophiles are well aware of some specific hashtags that can give them access to photos of children. Worse still, if you add your location to the posts, predators can also stalk your children, which endangers their safety.

Would you believe that commonly used hashtags that are best avoided include: 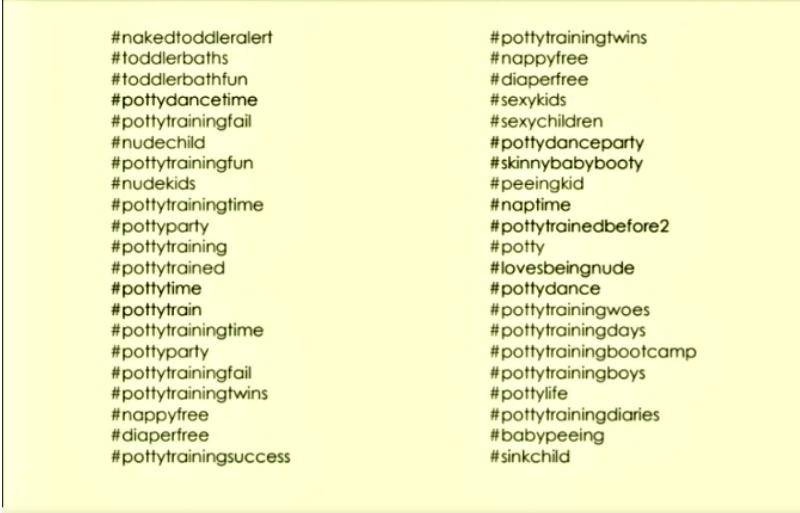 “While parents are naively posting intimate photos and details about their kids on social media, they have no idea how easily these images can be screenshot and downloaded by predators and sex offenders, who can manipulate, misuse and repost them on other sites,” chairman of Child Rescue Coalition, David Angelo said, in a statement.

As part of its “Kids For Privacy” campaign, the organisation recommends that all parents ask themselves these four questions, before sharing their kid’s pictures on social media:

Parents, we know that all you want to do is share your kids pics and happiness with your family and friends. But in order to make sure that they don’t fall into the wrong hands, please review your privacy settings on social media from time to time.

Here are some tips while posting pictures and videos of kids on social media: